"A NATION CANNOT OUTLIVE JUSTICE, WHERE LAW ENDS, TYRANNY BEGINS"
(This saying is etched into the peak of the Mahoning County Courthouse)

The Courthouse, is a historic building with a rich history in the Mahoning Valley. The need for a "new" courthouse became evident in the early part of the 20th Century. A short description of the process by which the courthouse came into being is described in the "History of Youngstown and the Mahoning Valley" by Joseph G. Butler Jr.,1921 Vol. 1. p. 234 :

"Another improvement decided upon about the same time the storage reservoir was projected was the construction of a new courthouse for Mahoning County. The old building had served its purpose well. It had been one of the boasts of the city, the township and the county, a show place for visitors and a place photographed with much pride when views of Youngstown were asked for. But it had seen thirty years of life, in the course of which Mahoning County had increased in population from less than 20,000 to more than 70,000. The old structure at Wick Avenue and Wood Street (no longer standing) was yet dignified in appearance and not a building to be ashamed of by any means, but it was inadequate for county needs and not in keeping with a county as rich as Mahoning."

"The campaign for a new county building--or county buildings--was comparatively brief. The need was not disputed, there was surprisingly little opposition, and at the election in November, 1906, the proposal for the erection of county buildings to the value of $1,000,000 carried easily."

"Considerable time was consumed in deciding upon the site for these buildings and it was a year before the location in Market Street between Front and Boardman streets was selected. Another three years elapsed before the structures were completed and thrown open for occupancy…"

The identities of the three statues located at the top of the Courthouse were rediscovered in 1957, when the external building was given an thorough cleaning.  “The bath revealed that the statue to the south depicts Justice.  It is of a woman in flowing robes, holding a fasces and not the usual balancing scales attributed to “Justice” statues.  The fasces, dating back to ancient Roman days, was a bundle of rods having among them an ax with a blade projecting.  It was borne before Roman magistrates as a badge of authority.  The figure in the center is of a man, holding a long sword in an authoritative manner.  The figure is labeled Strength and Authority.  The statue to the north is called Law and is of a woman, holding a rod in the palm of one hand.   The index and middle fingers of her other hand forma a “V” much the same as Winston Churchill’s famous victory sign.” (Vindicator, Sunday, November 15, 1957)

Below are pictures of the Old Courthouses in Canfield and Youngstown as well as the "new" Courthouse as it stands today. 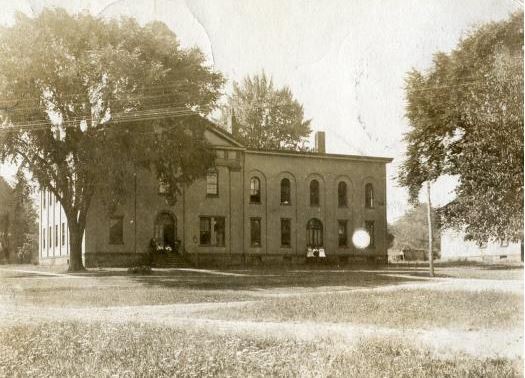 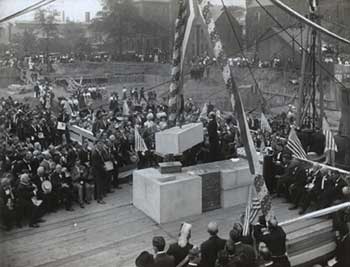 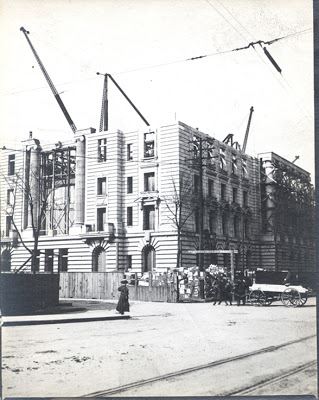 The following photographs of the interior architecture of the courthouse may be found on pages 177-179 of "County Courthouses of Ohio," 2000, by Susan Thrane, published by Indiana University Press.

For larger views of the interior, click on the pictures below. 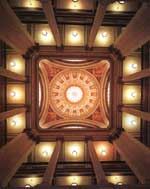 Reprinted with permission of the Publisher, Indiana University Press.